Good news for state workers: Nitin Patel says - we will give expensive allowance with benefits apart from the announcement of the central government 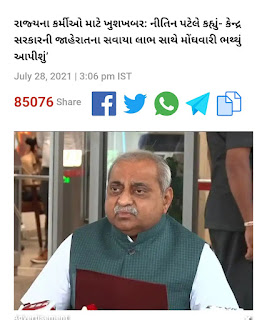 All employees will also be paid a total of three installments of Dearness Allowance (DA)
The next 6 months will be marvelous for the central staff. The employees' appraisal window is open till the end of June, in which they have to fill in a self-assessment. Apart from this, dearness allowance will also be available from July. All employees will be paid a total of three installments of Dearness Allowance (DA).
28% મોંઘવારી મુજબનો પગાર ગણવા માટેની EXCEL ફાઈલ ડાઉનલોડ કરવા માટે અહીં ક્લિક કરો.
This will also include increases of 1 January 2020, 1 July 2020 and 1 January 2021. The new allowance is to be implemented from July 1, 2021 by revising the old allowance. In addition to DA, Travel Allowance and City Allowance can also be increased. Apart from this there are many other expectations. In a nutshell, understand that there is going to be a bumper increase in the salaries of central employees in July.
What percentage can DA increase?
Expenditure Allowance (DA) for central employees is expected to increase by 4%. Central government employees are currently receiving a Dairy Allowance (DA increase) of 17 per cent. The same rate of DA will be applicable from July 2019 and is yet to be changed from January 2020. That is, three installments of January 2020, June 2020 and January 2021 are due. That is, the DA for 2021 is also set to rise. It is estimated that DA may increase by 4% in June 2021 as well. However it will be announced later.
Will PF and gratuity also be affected?
In addition to the Dairy Allowance (DA) for central employees, travel allowance and city allowance may also be increased in July. Whereas, additional provision is expected in provident fund and gratuity for retirement. If that happened then it would be nothing short of a double whammy for them. However there is a demand from the employees, they should also be paid the remaining arrears of last 18 months i.e. three installments.
The bumper will benefit if the arrears are agreed upon
Central employees have demanded that they also be paid arrears from January 2020 to June 2021, but, according to many media reports, sources say the government is not in the mood right now. The reason is that the burden on the exchequer has increased a lot due to Corona. However, a meeting of the finance ministry and the staff union is to be held on the issue, in which it is hoped to decide yes or no in this regard.
If you get a promotion, your salary will also increase
The next 6 months are very important for the central employees as they are likely to get promotions. Self assessment is to be filled by June. This is then reviewed by the officer and then the file is forwarded. Employees who get promotions, their salary (Employees Salary Hike) will also increase. The self-assessment assessment will be completed by December. Employees will be promoted and their pay will be increased as per the recommendations of the 7th Pay Commission
The government may increase the inflation relief allowance
According to media reports, after the announcement of the All India Consumer Price Index and the introduction of the Union Budget 2021 in Parliament, the inflation allowance has gone up by 4 per cent. According to sources, the government may increase dearness relief by 4 per cent. Also can pay other outstanding allowance.
The recommendation of the 7th Pay Commission will be implemented
The government's announcement on DA hike will be based on the recommendation of the 7th Pay Commission. Currently the central employee gets a DA of 17 per cent. That's 4% of DA and an increase in total DA.
IMPORTANT LINK 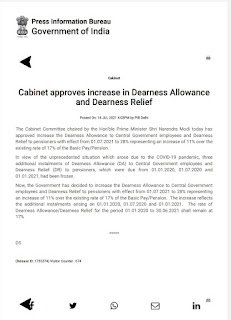 The state can run on the formula of the center
According to the report, freezing the DA and DR installments for central government employees and pensioners will bring the combined savings to Rs 37,530 crore this financial year. These savings are also being made in the year before that. Let me tell you that state governments can generally comply with the Centre's order on DA and DR. It is estimated that the state government can also save Rs 82,566 by suspending the DA-DR of employees and pensioners adopting this formula of the Center.
IMPORTANT LINK::-
સરકારી કર્મચારીઓને બેવડો ફાયદો

કેન્દ્રીય કર્મચારીઓને બેઝિક પગાર પર મોંઘવારી ભથ્થુ 17ની જગ્યાએ 28 ટકાના દરે મળવાનું, વાંચો ન્યૂઝ રિપોર્ટ નીચેની લિંક પરથી
Click Here To View News Report
ગુજરાતી માં વાંચવા માટે અહીં ક્લિક કરો.
28% મોંઘવારી મુજબનો પગાર ગણવા માટેની EXCEL ફાઈલ ડાઉનલોડ કરવા માટે અહીં ક્લિક કરો.
Salary Calculator is an application that is capable of saving the working hours, the amount of money worked and search at anytime the day sum of workhours and salary.
In fact every aspect was examined before the new wage code was implemented in the cabinet. In particular, after examining all the 196 allowances, the Cabinet has decided to retain 37 per cent and exclude 51 of them so as to reduce the burden on the employed and give them more benefits. Graduation is available only after working for 5 consecutive years in a company but under the new law, employees will be entitled to gratuity only after working for 1 year.
Tag : News Report

0 Comments for "Good news for state workers: Nitin Patel says - we will give expensive allowance with benefits apart from the announcement of the central government "